Based on your observations, a few of my own:

* This inability to unlock the glovebox from the glovebox is just nuts. This is so reminiscent of a Tesla mindset, it's scary.

* I find it disconcerting that the original design's ground clearance was less than the height of a cellphone. That's got to be an issue in some general use cases.. it just has to be. So if the changes, even though resulting in a loss of air suspension, results in a somewhat higher ground clearance, that's a good thing IMO. Of course I still think the car should have a proper air suspension at this tier.

* The thick roof rails and resultant issues opening & closing doors is a real concern. I don't know what the rationale for having such thick roof rails was, but it sure looks as if some design aspects were not thought through as thoroughly as they should have been.

I still haven't seen a Lucid in person and I'm still waiting for a N.Y. showroom to open either in the city or on Long Island so I can formulate my own opinions.

We're off to a rather rocky start in my book.
H

Lucken said:
I find it disconcerting that the original design's ground clearance was less than the height of a cellphone.
Click to expand...

If the showroom prototypes, in fact, have the air suspension, it might have been programmed to lower the car when parked in order to ease entry and exit and raise the car once underway.


Lucken said:
Of course I still think the car should have a proper air suspension at this tier.
Click to expand...

In asking the question I was hoping to hear something about tradeoffs between air and coil spring suspensions and that the decision to use coil springs had to do with favoring one set of tradeoffs over another for ride and/or handling reasons. To hear that it was dropped because they couldn't get them from a supplier set me back a bit on my heels.

The Porsche Taycan is being produced with air suspensions. The EQS is coming to market with an air suspension. Rivian is using air suspensions on its pickup (which starts shipping next month) and SUV. Air suspensions are all over the place in everything from airplanes to long-haul semis to luxury sedans to sports cars. For Lucid to forgo something as important as the air suspension they planned to use because they can't find a vendor boggles my mind.


Lucken said:
The thick roof rails and resultant issues opening & closing doors is a real concern. I don't know what the rationale for having such thick roof rails was, but it sure looks as if some design aspects were not thought through as thoroughly as they should have been.
Click to expand...

Given the frustration Rawlinson has expressed over the lack of torsional rigidity with which he had to contend on the Model S and the fact that several Lucid engineers and journalists have commented on the vault-like solidity of the Lucid body, these roof rails probably play a vital role in that rigidity. While they are quite visually intrusive, the effect is somewhat relieved by the glass canopy. I could find them easier to tolerate if the doors could be closed without having to duck under them.
L

So if the Air was initially to be equipped with air suspension, do you accept its absence is due to supplier issues…especially when other manufacturers seemingly have no issues? For me it strains the credibility.
H

I don't know what to make of it. I looked closely at the cut-away chassis in the showroom. Although it had conventional sway bars, it did not have coil springs or anywhere apparent to mount them. What looked like shock towers had what might have been reservoir tanks on them for an air spring setup. I asked the floor manager, and he had no idea. And we know from internet job postings that at one point Lucid was advertising for a Senior Engineer for Air Suspension with a list of job duties that clearly indicated an intent to put an air suspension in the car. As late as the reveal last September, "Car & Driver" and "Motor Trend" were reporting that the car would have an air suspension, presumably being given that information by the Lucid people in attendance at the reveal.

When I called Lucid Sales a couple of weeks ago and got confirmation that the air suspension was gone, they were unable to give me a reason. In the absence of any other explanation coming from Lucid about the abandonment of an air suspension, what I was told at the Design Studio yesterday is all we have to go on.

If the issue really is lack of a supplier, that would suggest that Porsche, Mercedes, Audi, and Rivian are all doing their air suspensions completely in-house . . . . How likely that is I just don't know, but I tend to doubt it.
Last edited: Jun 10, 2021
L

Of course Lucid is not alone in this problem of getting straightforward answers for simple questions, but it's very frustrating nonetheless. It just leaves a bad taste in your mouth.
H

What I'm really curious about is the ride-alongs that have been done with journalists. Both Nikki Gordon-Bloomfield of "Transport Evolved" and Kyle Conner of "InsideEVs" commented on how compliant the ride was, and Gordon-Bloomfield, who was put through more dynamic maneuvers, reported very taut handling in the twisties. However, both those ride-alongs were in beta version cars, not the gamma versions currently undergoing testing.

The transition to coil springs was apparently made sometime after the September reveal, based on "Car & Driver" and "Motor Trend" reporting of that event. So, did those ride-along beta cars have the air suspension or the coil spring suspension?

I emailed "Transport Evolved" with this question a week ago but have gotten no response.

P.S. I just emailed Kyle Conner from "InsideEVs" the same question. I'll report if I hear back anything.
Last edited: Jun 10, 2021
H

Also, the release build cars that will be provided to customers and the press for test drives are being built this month, with test driving to commence shortly thereafter.
A

hmp10 said:
Also, the release build cars that will be provided to customers and the press for test drives are being built this month, with test driving to commence shortly thereafter.
Click to expand...

This is great news if it happens that soon. The latest information has me a bit worried and the best way to tell is to see it for ourselves and give the journalists access to drive one. I flew over the factory last weekend and there were only 4-5 cars in the parking lot. Previous weekends there were 15-20 cars there. The good news is that the ground is being prepared for the factory expansion.
H

Adnillien said:
I flew over the factory last weekend and there were only 4-5 cars in the parking lot.
Click to expand...

It seems that the cars being built in Casa Grande are being sent to HQ in California where all the non-manufacturing personnel are based. None of the ride-alongs have been done in Arizona, and the video showing Lucid engineers doing evaluations of release candidate cars was filmed at HQ.
H

it seems that, unlike the cars in Miami and West Palm Beach, the Lucid Air in the newly-opened New York Design Studio has the final interior or very close to it.

Here is the front seat in the Miami car: 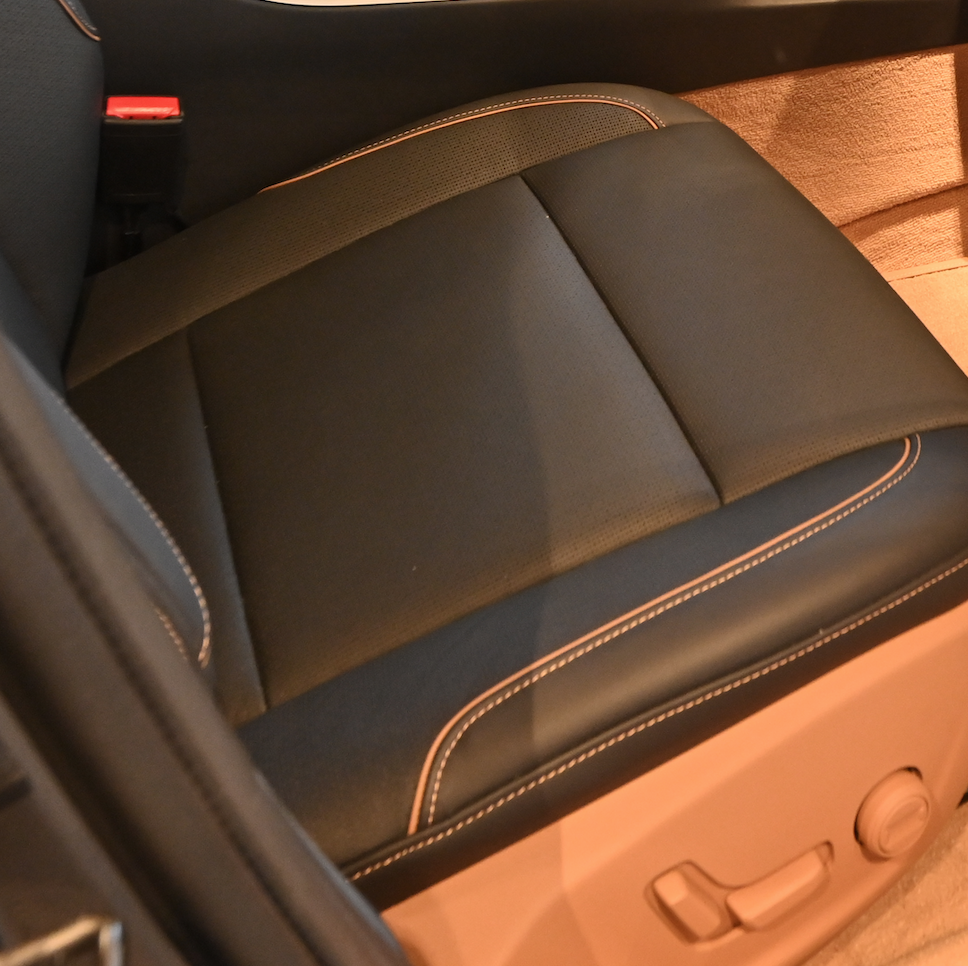 Here is the front seat of the New York car with the adjustable thigh support: 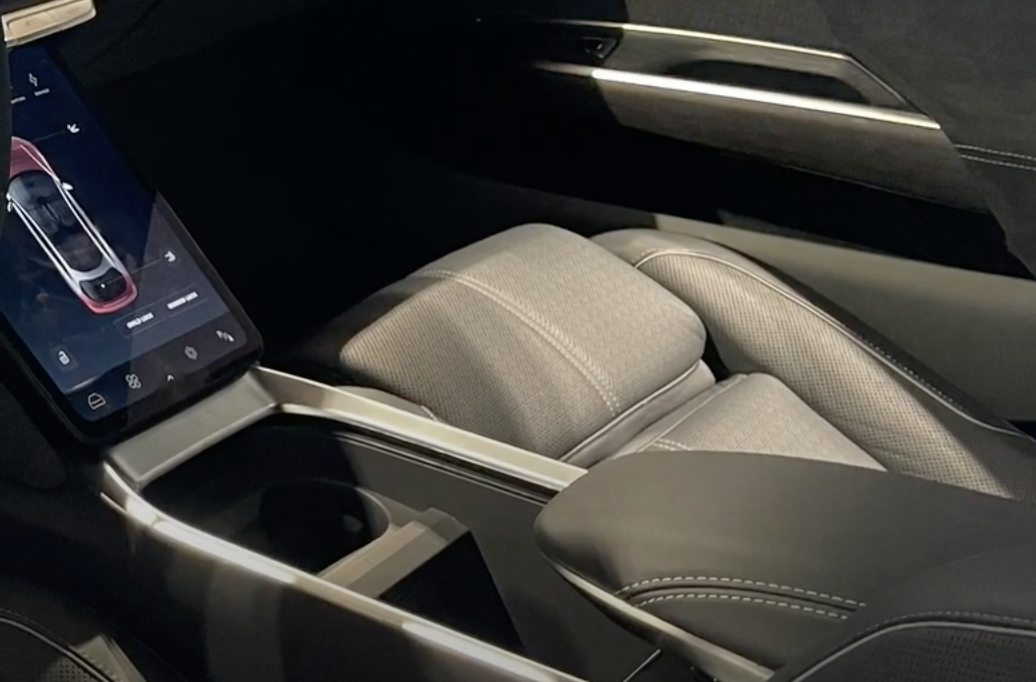 Here is the rear fold-down armrest that was missing from the Florida cars; 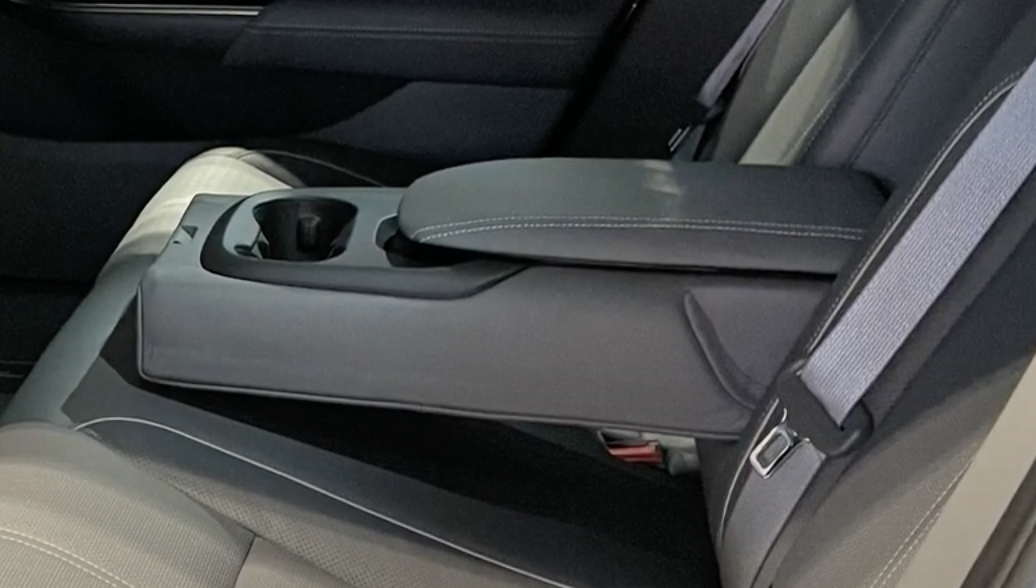 And here is the power-operated sunscreen in the rear doors:

I know the lack of four-sided framing in the front glass canopy makes such a shade unfeasible there, but I wish Lucid had put a retractable sunscreen over at least the rear glass canopy. (A friend's new VW ID.4 has such a feature, and it makes a real difference here in south Florida.) I noticed that Derek Jenkins was wearing a baseball cap in the demo drive he did at the Amelia Island Concours in Florida a couple of months ago. I have not seen him wear such a cap anywhere else, and it leaves me worried about the canopy in our local climate.
H

I just found a reservation tracker on another forum where 23 people have reported the model and color choices they made in placing their Air reservations. There are only 23 responses. Remembering that some choices were constrained because not all exterior and interior colors are available across the models, here are the results:

6 Zenith Red (1 person specified it for a Dream Edition, where it is not as yet available)
6 Quantum Grey
4 Eureka Gold
3 Infinite Black
2 Cosmos Silver
1 Stellar White
1 TBD

7 Santa Monica (1 person specified it for a Grand Touring, where it is not as yet available)
7 Mojave
6 Santa Cruz
2 Tahoe
1 TBD

Jonny Lieberman of "Motor Trend" said the Air looked "fantastic" in Zenith Red, and Tom Moloughney of "InsideEVs" said it was "absolutely gorgeous" and predicted it would be the most-chosen color. He may not be far off the mark.