​
The 1080-hp Dream and 1300-hp performance versions of the upcoming Air luxury sedan will both be out next year, with Tesla firmly in their sights.
Smoke billowed up from the brakes of the beta Lucid Air Dream Edition car. After a few hot laps at WeatherTech Raceway Laguna Seca, the stopping power of the luxury EV had likely been compromised. Hitting roughly 120 mph before braking hard to navigate through a left turn does that when the vehicle is running stock brakes.

Laguna Seca has become a battlefield for EVs as of late. Tesla did a 1:36.6 lap time way back in September 2019 with a preproduction tri-motor Model S. Last week we joined Lucid at the same track to experience a hot lap in the preproduction Air Dream edition and get a look at the automotive startup's specially built tri-motor performance version of the Air. While we didn't get time behind the wheel, the ride was taut for a vehicle that's targeting the luxury segment. The heft of a vehicle carrying a large battery pack was apparent but was for the most part kept under control by the driver.

​
Behind the wheel of the preproduction Air was David Lickfold, Lucid's senior manager of chassis and vehicle dynamics. He said that the beta's chassis was about 60 percent complete. "Its a little bit rough and ready, but we want to give you a flavor," Lickford said. The vehicle's semi-active dampers were set about halfway between a cushy ride and something harder.

After a warmup lap, the Air hit 120 mph along the front straight before braking hard after dropping in elevation and taking on the track's first tight corner. The acceleration was reminiscent of Ludicrous mode in a Tesla Model S: the type of burst of speed that elongates your internal organs.

Lickford noted that the Air is intended to be a luxury car but said that if the company can tune the vehicles to handle Laguna Seca, "all the better." While the vehicle has been tuned a bit for the track, the brakes were still stock. Lucid said it is working on getting a performance brake setup from a third party. As we pulled into the pits, the smoke coming from the brakes was visible from the passenger seat.

​
Air Performance Model Has 1300 HP
While hot laps in a preproduction car are fun and helpful for the automaker to tune its vehicle, there was also something else hitting the track during our visit. A tri-motor performance version of the Air with more than 1300 horsepower was there to best Tesla's time from last September. The two companies are intertwined: both have their headquarters in the Bay Area, and Lucid CEO Peter Rawlinson was the head engineer on the Model S. Other engineers and designers from Tesla have landed at Lucid over the years. Even Lucid's philosophy of engineering everything in-house has been brought over from Tesla.

The tri-motor vehicle has a body kit that includes a rear spoiler, diffusers, and fender flares to handle the larger tires needed to keep the vehicle on the track and not flying off into the gravel. The brakes are still stock, though. To solve the heat issue (and smoke that follows), Lucid set up tubes under the hood to direct air to the calipers and rotors. 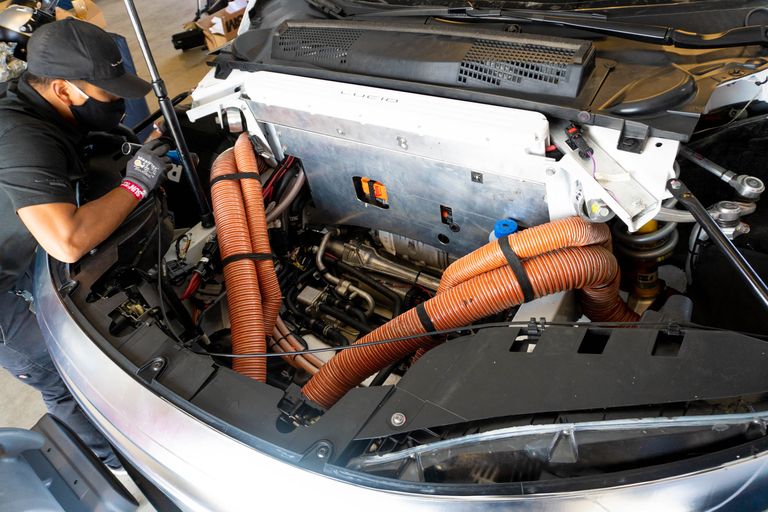 ​
Every run involves a warmup lap, hot lap, and cool-down lap before the vehicle is brought back into the garage for data analysis and lap times. Drivers are debriefed, and the vehicle is recharged. Lucid didn't share the times of these runs, but judging by reactions from executives and the team, they must be good.

When asked if Lucid was here to one-up Tesla, Rawlinson replied that Laguna Seca is the local track. It's the local track for Tesla as well, which is why it did its run here before heading to the Nürburgring to battle it out with the Porsche Taycan for EV sedan bragging rights.


https://twitter.com/i/web/status/1309153116458291202
What Lucid would share is a quarter-mile from the three-month-old performance car. The tri-motor vehicle did a 9.2-second standing quarter-mile at Sonoma Raceway, also in the Bay Area.

The performance Air is scheduled to go on sale toward the end of 2021, Lucid said, but no price has yet been announced.

A Bay Area Rivalry to Watch
A few days after Lucid was at Laguna Seca testing its preproduction cars and pushing its performance vehicle to the limit, Tesla showed up the following Sunday with the Model S Plaid, the upcoming tri-motor EV with a sub-nine-second quarter-mile and a Laguna Seca track time of 1.30.3. The 1100-hp car was announced with 520 miles of range —three miles more than Lucid's 517—at a price of $140,000. 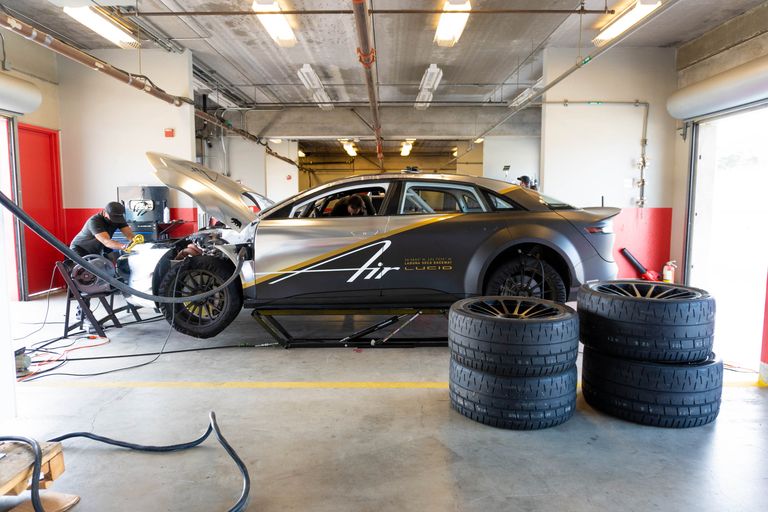 ​
It's not that surprising that the two automakers, one new with a car only a few months old and one established, have decided to hash it out this way and in this place. Tesla has more than a decade of experience over Lucid in the war of speed. But Lucid seems ready to take on, to some, a former employer. The result will be faster and faster EVs that only the founders of Silicon Valley startups will likely be able to afford. But at least they have local tracks to race them.