Lucken said:
I went back and took another look at the video and you’re 100% correct. Somehow those narrow windows had eluded me. I don’t know the height of the reviewer, but it’s clear he has adequate headroom, so I doubt he’s 6’6”. You’re correct, this issue is also manifested when he’s in the driver’s seat. Not good.

I can’t recall ever owning a car where I had to scrunch my neck to look out the windows. Now granted at 5’7” this ’may’ not impact me, but it surely will impact friends I have in the car. Claustrophobia, with that huge glass canopy, is certainly not something I ever considered in the Lucid, but.....
Click to expand...

I feel the same way about the side glass. The crazy bulky roof rails wouldn't bother me as much, or at all, if they had been positioned more in the top plane of the roof rather than down the side. I could easily live with a slightly less wide "sunroof" but lower tops to the side windows isn't great. The taller cabin windows are one of the improvements I appreciate most in Boeing's Dreamliner. I hate having to lower my head just to look out horizontally in other commercial aircraft. Although the side windows in the Air aren't nearly that bad, the impression from the photo in my earlier post seems like a similar experience for non-height challenged people in the back seat.

Moving the roof rails to the top rather than the side would also alleviate the problem of having to warn people about not hitting their heads when getting in or out without hurting the aesthetics of the roofline or impacting CD.
L

hmp10 said:
The Lucid's roofline is about 4" lower than the EQS. However, Zak Edson, Lucid's head of Retail Operations, actually is 6'6" tall, and he didn't have any problem with headroom when he sat in the backseat at the Miami studio to demonstrate the leg room. That is because the rear seat cushion in the Air is low, which causes the knees-up sitting position).

When I sat in both the front and back seats of the Air, I did notice the thickness of the roof rails. However, with the glass canopy the car didn't feel too claustrophobic. But then, again, I, too, am only 5'7" and the car was inside a showroom. No matter how you parse it, the Air does have a high belt line -- not as extreme as the old Audi TT, but hardly the expansive side picture windows of a Land Rover.

It seems that somewhere along the line Lucid has abandoned an air suspension. More and more features of this car seem to be dropping by the wayside.
Click to expand...

I find the lack of air suspension, if true, to be absolutely incredible in a car of this price. My just purchased Audi E-Tron Sportback most certainly has air suspension and its ride & sound supression are absolutely delicious. I just plugged in at an EA charger and put on about 125 miles in about 14-15 minutes in temperatures in the upper 30s. EA charging is free for everyone today as an 'Earth Day Event'. The only negative of the E-Tron is the 220 mile range, but considering I rarely take long drives these days, it's not a major issue. We have a Lexus hybrid if need be. However with the rapidly growing number of EA chargers, and the fast charging of the Audi, I wouldn't hesitate to take this car on a long drive.

The more I hear and see what's going on, the more it seems I'll be more than happy to hold on to my E-Tron. I won't request my deposit back quite yet, but I'm surely getting very close.
H

Lucken said:
I find the lack of air suspension, if true, to be absolutely incredible in a car of this price.
Click to expand...

I just re-watched the "Transport Evolved" ride-along with David Lickfold, who is in Lucid's chassis engineering group. Even though he got as specific in discussing the suspension as saying the car used Bilstein semi-active dampers, he nowhere mentioned an air suspension. I also looked more carefully at the Lucid website, and under "Suspension" on the specs page, all it says is "semi-active dampers". There is no mention of an air suspension.

On the other hand, Nikk Gordon-Bloomfield discussed how remarkably compliant the suspension was in soaking up potholes and pavement undulations while at the same time praising how taut and precise it kept the car in aggressive maneuvers. I suppose it's the results that count more than how they got there. And coil spring suspensions are less problem-prone than air suspensions. It's worth noting, though, that this car was an earlier beta model instead of the gamma cars that are now in testing. I'm wondering if it still had the air suspension that was touted in September 2020 but has perhaps since been abandoned?

I got the air suspension in my 2015 Tesla when it was still an option instead of standard as it now is. I remember the car press at the time said the air suspension did not contribute meaningfully to improvements in ride or handling over the coil-spring suspension, which they thought Tesla had calibrated nicely.

At the end of the day, I want to see what seasoned auto journalists say about the car's dynamics and ride comfort when they are finally able to test drive the car themselves independent of Lucid supervision.

I have to say, though, that I'm getting more and more worried that Lucid, finding itself much further behind their production time line than they expected, is beginning to drop features that are slowing them down. I had hoped that the additional time would allow them to resolve issues with things such as power-operated doors, under-seat toe room, and maybe even add an HUD to catch up with what is happening on that front since the car's original design. It looks as if things might be going in the opposite direction.
L

I'm not going to rationalize, this car at this price should have air suspension...at least that's how I feel about it. I've had it in several cars and have not had any issues. I think it unquestionably improves the ride and provides the opportunity for adjusting ride height.
H

Understandable. I will say, though, that I had a 2004 Lexus RX330 with the rare air suspension option. (I took the car with it because the dealer discounted the car heavily as other customers were not willing to pay for it, and the car was stuck on his lot.) It failed three weeks after the warranty expired and cost me $2400 to fix. By then Lexus has discontinued it altogether.

If Lucid scrapped it due to cost, that's an outrage given what they're charging for the high-end models. If they scrapped it because they couldn't get it to work properly, that's a different concern. Either way, I hope this turns out to be false information.

(When I called Lucid Sales a few months back to inquire whether its regenerative braking would be set up for one-pedal driving, I had to explain to the sales rep what regenerative braking was. I'm hoping the Design Studio associate and the media rep just didn't know what they were talking about.)
L

To be honest, if they scrapped it because they couldn't get it to work properly, that would be a bit of a concern too. Almost any high-end automaker knows how to develop and implement adjustable air suspension. Why not Lucid? I agree with you that if it was ditched due to cost, shame, shame, shame.

I guess in the end this is all speculation and we'll have to see how it unfolds, but I think if we're honest, there are some red cautionary flags that we weren't aware of before.
H

I agree. Every one of these new Lucid-sanctioned videos that are coming out just increases questions and doubt rather than dispels them. This is not the right publicity trajectory for Lucid at this point.
Last edited: Apr 22, 2021

I was scouring the internet to find out if Lucid air Has an adjustable suspension and came across this article in Electrek. From the supposed Driving Settings screen, you can see that the suspension high is adjustable. But this article is over 4 years old, so who knows? 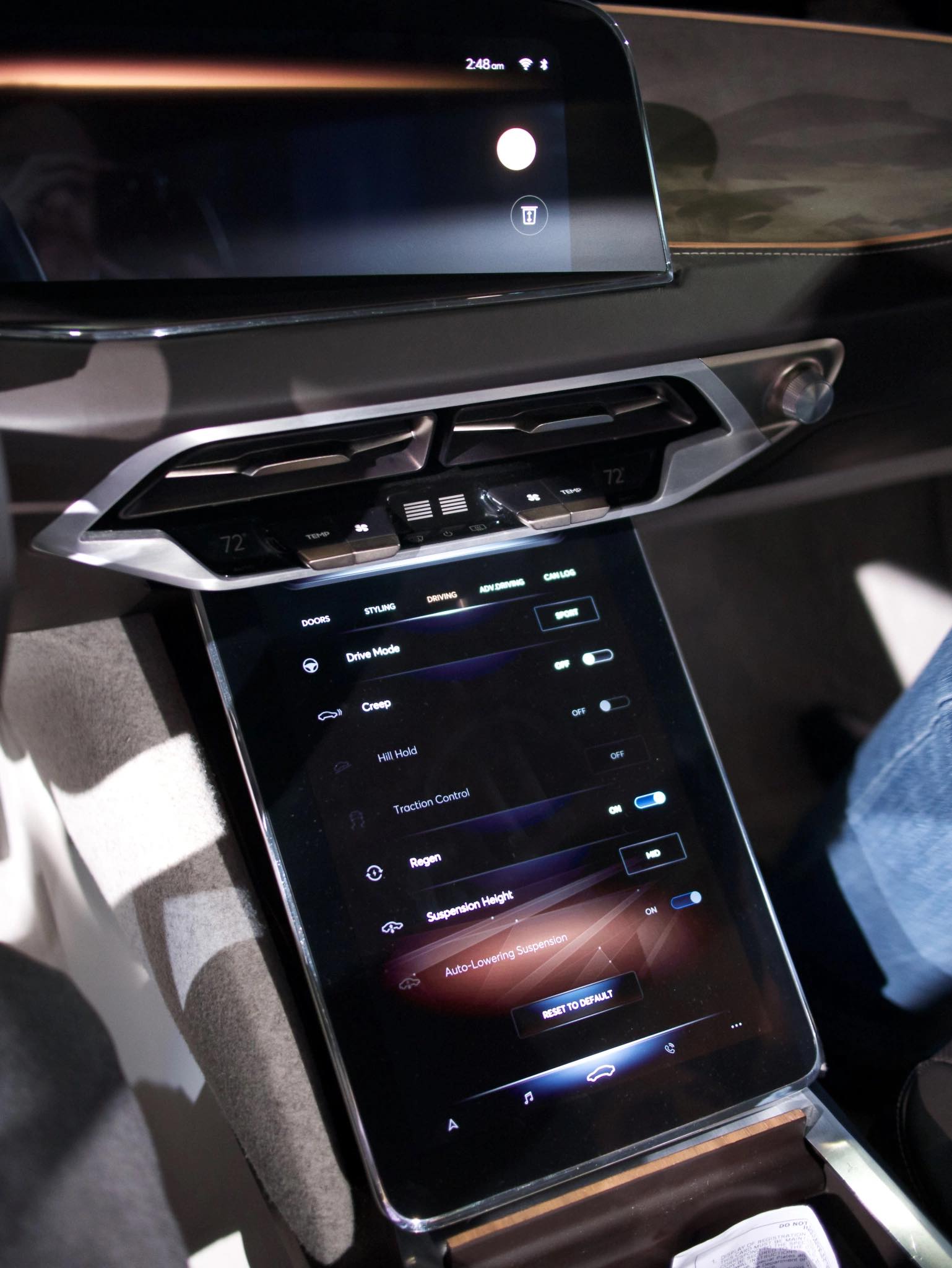 We’ve been looking at some details of the Lucid Air this week, after seeing the car up-close-and-personal at a private event in LA this last weekend. Now to delve into some details of the car’s interface with a little wild speculation. Hop below the jump for some pictures and analysis. The...

I hope the air suspension has carried through to the production car. However, the alpha cars also had a switch above the rearview mirror to activate electrochromic dimming in the canopy, and we know what happened to that . . . and to acoustic glass . . . and to full-spectrum active noise cancellation . . . and (at least at production outset) to power-operated doors. This car is losing features as time passes rather than gaining them. And time just keeps on passing.
L

Well, yesterday I spoke with my sales and marketing associate and he talked me off the cliff. As a result, I didn’t cancel my reservation and everything’s still a go. Before drawing any final conclusions, once a job 1 unit is available I’m going take the short drive to headquarters and get some seat time. I’m not interested in any VR or preproduction examples. Need the real deal.
H

Despite my growing doubts, I'm hanging in, too, until some actual production cars get into the hands of reputable auto journalists and I can test drive a car over in Miami myself.