Inside EV ride along

Some concerning things, but rather than editorializing, have a look at the video:

Once again we have another video that mentions how many things beyond just final manufacturing and assembly issues are still not nailed down with the Air.

This seems to be the same Air that "Endgadget" reviewed a couple of weeks ago. And the car on the display podium at the Amelia Concourse was the beta Air transported up from the Miami Design Studio. The only thing on display meanwhile at the Miami showroom is a car with a vinyl wrap on which they're not even allowing the doors to be opened. It seems that the cars available for public display are still in very limited supply.
H

hmp10 said:
Once again we have another video that mentions how many things beyond just final manufacturing and assembly issues are still not nailed down with the Air.

This seems to be the same Air that "Endgadget" reviewed a couple of weeks ago. And the car on the display podium at the Amelia Concourse was the beta Air transported up from the Miami Design Studio. The only thing on display meanwhile at the Miami showroom is a car with a vinyl wrap on which they're not even allowing the doors to be opened. It seems that the cars available for public display are still in very limited supply.
Click to expand...

That’s what I was referring to when saying I’d refrain from editorial comments.
H

No worries. I'll be glad to supply the editorial comments.
H

Bloomberg News just posted a video about Lucid production. It was done by Edward Ludlow who covered the convoy range test last August and who is one of the most even-handed automotive reporters out there:


Interestingly, the car's power has been "tweaked" (no specifics given), and weight has been reduced (no specifics given). Also, at 1:01 the front lower driving lights of the car seem to be reconfigured from a straight vertical bar to a rounded triangular shape -- or is that just a reflection off the white paint?

What I most noticed, though, was that there was a lot of focus on problems with getting to production, coupled with an avoidance of any suggestion of when production might finally start. Although the video opened with a chart showing 577 cars this year, Rawlinson only said that 20,000 cars next year was realistic. Rawlinson himself never once affirmed earlier claims that they would start production before year end. In fact, he said "I don't see improvement right now" in referring to issues with suppliers.
W

The following from some reviews at the Amelia concours auto show this weekend.
"Some automotive insiders were able to get behind the wheel of the much anticipated Lucid Air sedan this past weekend, and thus far reviews have been mixed. The vehicle has been applauded for its innovative design and long-range battery charge, but has also been criticized for inconsistent acceleration and issues with the dashboard screen. Overall the sentiment from the Amelia Concours auto show was extremely positive though, which is a good sign for CCIV investors ahead of production later this year."

Is this the review you mean?

Those who have ridden in especially powerful electric vehicles often compare their acceleration to that of a spaceship. And while that’s perhaps as overused and unrelatable as a metaphor could be (if you have traveled in a spaceship, I’d like to hear your thoughts), it does convey an...
jalopnik.com
L

If the issues with the dashboard screen are software related, that should pose little problem in terms of a correction. If the problem is due to the screen itself (as Tesla had for some model years...mine included), then that's more of an issue.

As for the 'inconsistent acceleration', that's a new one.

I think we see why this car is not yet ready for prime time.
H

In Rawlinson's test drive in SoCal a few weeks ago, he mentioned an issue with acceleration from 0-2 mph. I can't remember the term he used, but I wonder if the comment about inconsistent acceleration is related to that.

At least in the Jalopnik review, they mention "suspension set to Sport", although from the screenshot, it doesn't say suspension - just "Sport". The screen shows three settings. Also notice some of the other UI elements (such as doors), which maybe goes to show that this is a stock photo or a not what is going to be available. They do have a "Massage" function still. Can't wait for the UI reveal on 26-May-2021.
View attachment Lucid Dash@0.5x.jpg
H

You have to go into a screen menu to open the glovebox? Oh, jeez . . . I thought they were paying attention to user friendliness.

And this car's been roughed up a bit. Look at the panel covering to the left of the dead pedal. I know the car on the podium at Amelia was brought up from the Miami Design Studio. I'm wondering if this white car has done some heavy display duty in another showroom.

Also, I wonder if they're keeping that leather boot where the steering column enters the dashboard? Not exactly a clean line there. I don't remember seeing something like that in Miami or West Palm, but I wasn't focusing in that area.
H

Alex said:
At least in the Jalopnik review, they mention "suspension set to Sport" . . . .
Click to expand...

This is the second ride-along in which the sport setting was mentioned as providing a compliant ride. I wonder when -- or if -- we're going to find out anything about the suspension of the car other than it isn't an air suspension.
J

All the production quality niggles referenced in this and other threads don't seem all that different to what many other automotive manufacturers sometimes experience. The difference is that other brands seem to sell them anyway and then fix the issues on the fly with future updates. That is one reason for the stigma of buying a "first year" model. I acknowledge that the premium/luxury market segment can't really tolerate that kind of approach and therefore understand why they are electing do further delay delivery to consumers to get it better. I say say "better" rather than "perfect" since IMO there will always be something they could improve and at some point they are going to have to make the call that it's "good enough". Which is an obvious tradeoff of time vs quality. If they wait for it to be perfect we will never see the cars and the company will eventually fail.
Last edited: May 26, 2021
L

True they don’t need to wait for perfection, but they do need to wait until they have a car they can offer to reviewers that don’t have some of the obvious defects we’ve seen.

Remember this car isn’t simply in the ‘premium/luxury’ segment, it’s in the stratosphere of that segment. They need to show a car at release that is devoid of any significant issues. Anything less will spell disaster IMO.
H

if there was any lingering doubt/hope about an air suspension, this video shot of an Air during assembly makes it clear that it uses a conventional coil spring suspension with anti-sway bars. That's a Bilstein air shock, I think.

I wonder if Lucid ever even filled that Air Suspension Engineer job they posted a couple of years ago. 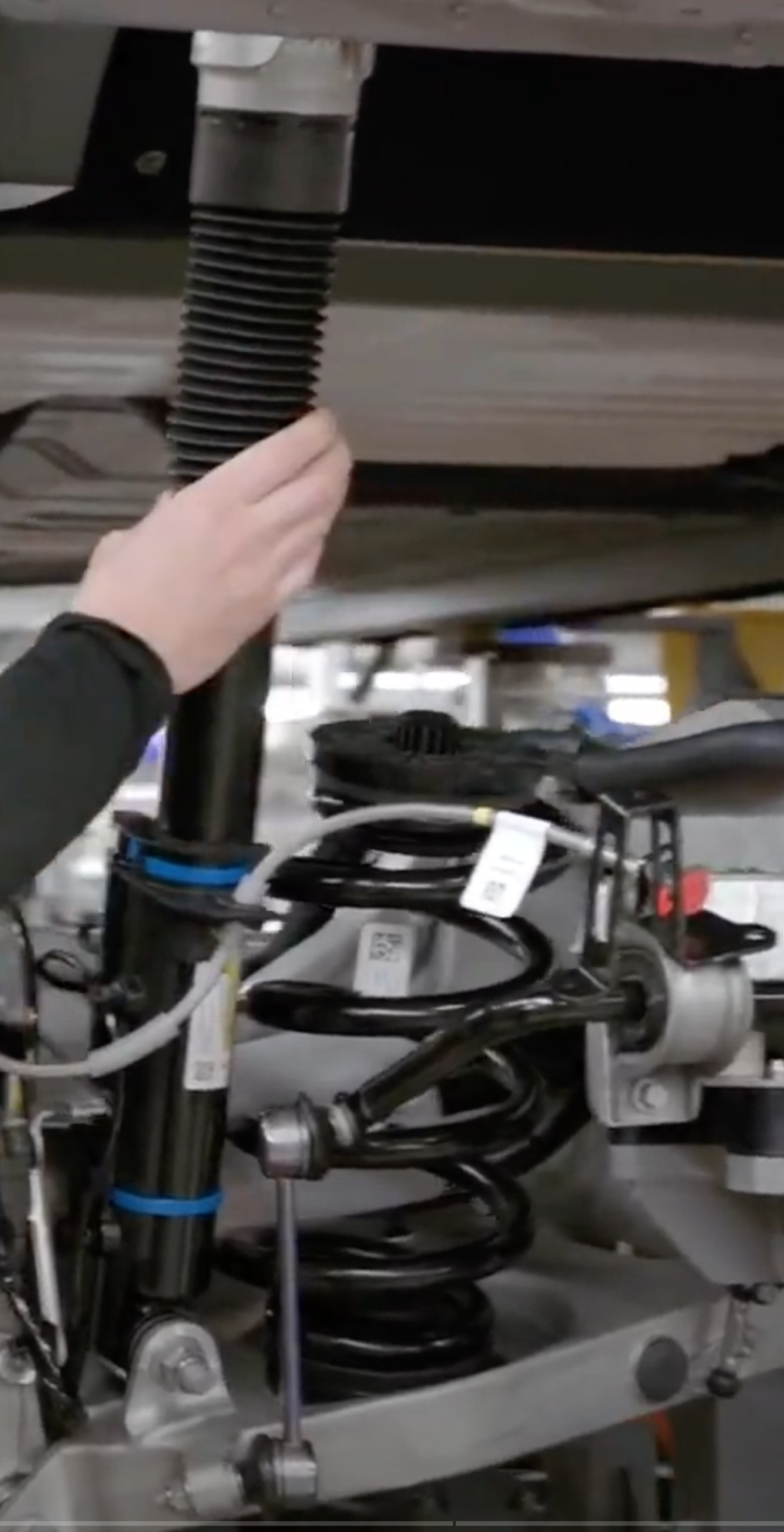 In this price class, it just makes me scratch my head.
H

This car sits extraordinarily close to the ground for a sedan. If there is not some way to raise the height when approaching parking stops or certain driveways, the car will be spending a lot of time in body shops.

The front height is very similar to that of the Audi R8's I had which had no ride height adjustment. I lived in Chicago at the time I got the first one, and the closest Audi dealer was in an older downtown industrial building. The service center was on an upper level accessed by a ramp. The first time I took my car there for service they could not get it up the ramp, and I had to take the car out to a suburban dealership for service. The first time I took the car to a garage to have the winter snows put on they could not drive the car onto the lift rack until they sent someone across the street to a Home Depot to buy some boards to fashion a make-shift ramp.

If the front end of this car cannot be raised when needed, it will experience similar problems.

Wow, I never noticed that. This is an issue not just for parking stops or driveways (my driveway could be an issue too), but also for potholes. Hopefully the finalized version will have a greater ground clearance than this.